When will you get your score back? 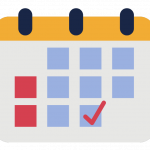 When are the CPA exam scores released?​

It is important because you can plan your CPA exam testing schedule around the next score release date. There is nothing worse than sitting for a specific section of the CPA exam, and then having to wait several weeks or longer to get your score back! Even if you fail a section, you can now plan to sit for your retake as soon as you can get a testing date at your local Prometric Center.

As an FYI, the AICPA and NASBA release the CPA exam scores for some states the night before the scheduled release date (typically 8pm EST). Be ready and check the NASBA Twitter feed as they typically announce when the scores will be released!

What is the process for releasing the CPA exam scores?

The table below is the expected CPA exam score release date for CPA candidates that sit for a section of the CPA exam from July 1, 2022 to December 31, 2022.